On March 9, 2014, Tony Haile, CEO of Chartbeat, wrote What You Think You Know About the Web Is Wrong:

“We confuse what people have clicked on for what they’ve read. We mistake sharing for reading.”

“In 1994, a former direct mail marketer called Ken McCarthy came up with the clickthrough as the measure of ad performance on the web. From that moment on, the click became the defining action of advertising on the web. The click’s natural dominance built huge companies like Google and promised a whole new world for advertising where ads could be directly tied to consumer action.” […]

“In 20 years, everything else about the web has been transformed, but the click remains unchanged […]”

“[…] there is no relationship whatsoever between the amount a piece of content is shared and the amount of attention an average reader will give that content.”

“Over the last two years, Facebook has slowly begun cutting back on the organic reach of page posts, whittling it down from 16 percent in 2012 to around two percent now for pages with over 500,000 fans. Brands have found themselves paying money lately to get posts out to fans that they’d already paid money to acquire.”

“If someone follows my page I should know 100% that they are going to see it – especially if I paid for that like. In fact, there is a HUGE class-action law suit waiting to happen from people who paid for LIKES with the understanding their updates would reach those paid for fans.”

Enter Shario (Full disclosure: I was a co-founder):

The problems above, had a big impact on how our team at Shario developed our mobile app for customer referrals & customer loyalty. 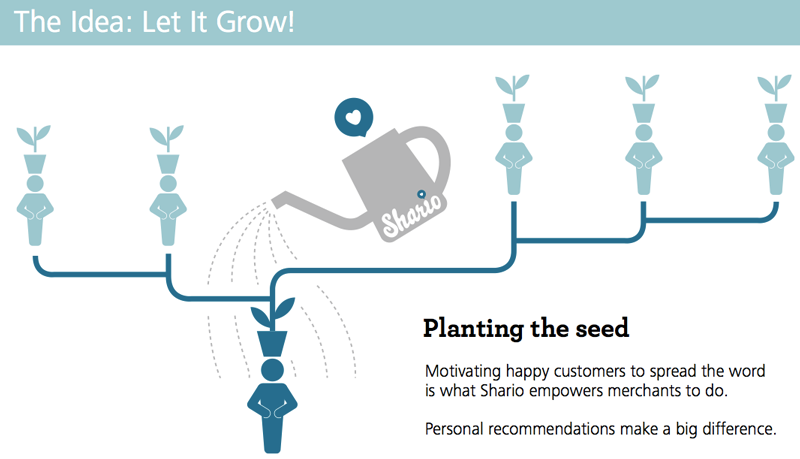 In contrast with the problems cited in the beginning, with Shario the business owner sees revenues directly tied to consumers acting (inviting each other). Not the check-in into the location or the social sharing are being tracked and rewarded but those invites which have lead to new foot traffic spending real dollars.

Loyalty programs and apps that let customers collect points do not do more than keep existing customers loyal.

Whilst customer loyalty is also built in, Shario first and foremost drives customer referrals. We want to bring completely new foot traffic to small businesses: Revenues they would not have had without Shario.

CRM features in Shario let multiple staff members in multiple store locations know what typically only the owner knows: Who to thank for bringing how many paying customers? Who is how loyal? Who gets a lot of refunds?